In the guides up to this point we have often connected UI Controls, such as Text Inputs, to data. In this guide we will present a few patterns that is commonly used to connect data to UI controls.

The output is used to write the data to some sort of data node. Most UI Controls have a Changed signal output that is triggered when the user has interacted with the control. This should be used as a trigger to an action that writes data. The most simple one being shown below. When the slider is updated we write the current value to a Variable.

This can be useful to create truly reactive user interfaces. Take the simple example below, where you have both a Text Input and a Slider that are both controlling the volume. The slider updates as soon as the user interacts with it, and the text input when it's blurred (looses focus) or when you press enter. 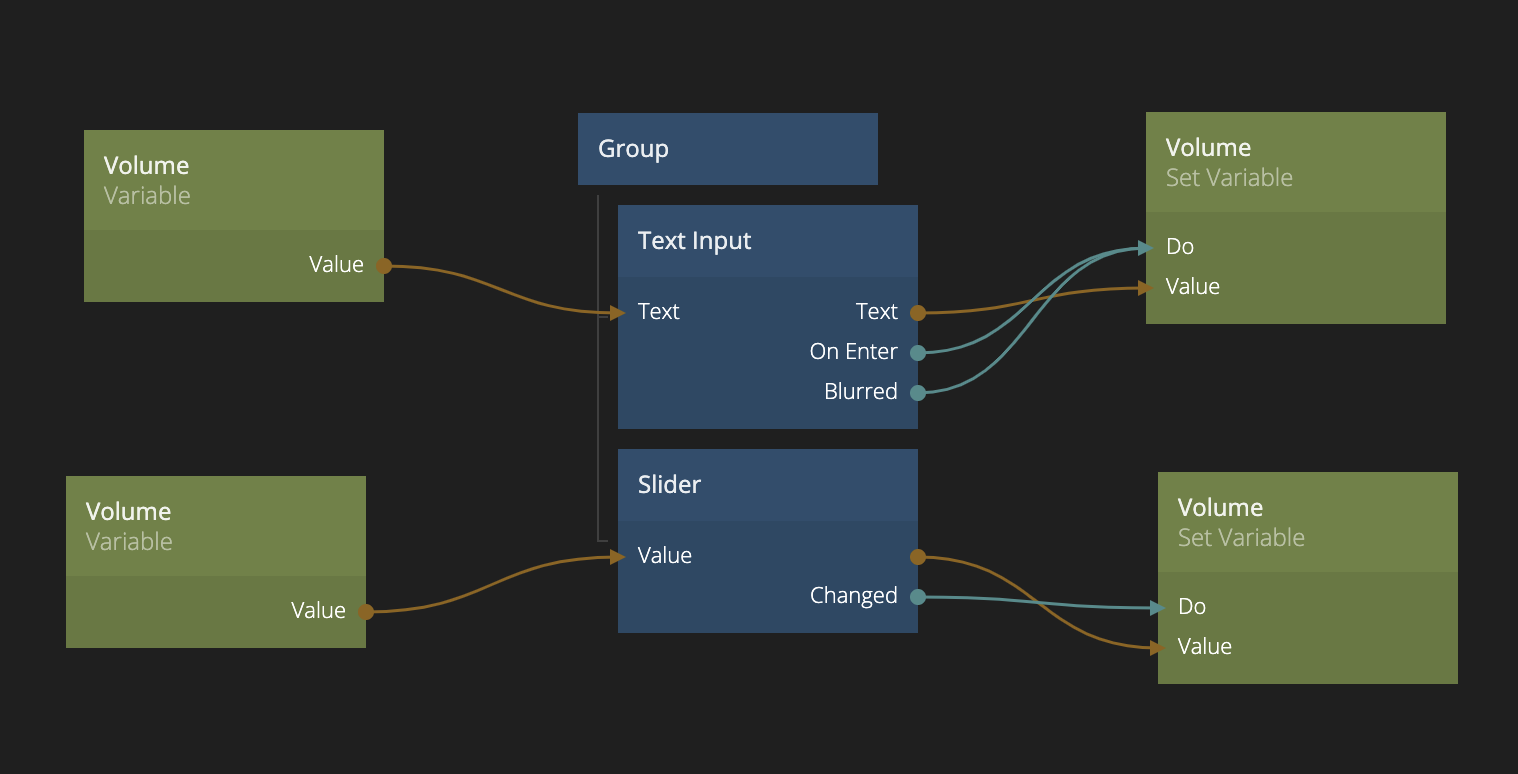 Hooking you controls up likes this will keep them in sync when interacting with them. Check out the result below:

Many times you want to use a form, or simply a set of UI Controls, to view and edit the data in an Object. You could create a component that has an input for the object id of the object it should edit and then use the pattern above, but instead we want to save when a button is clicked. Let's say we want to create the simple form below: 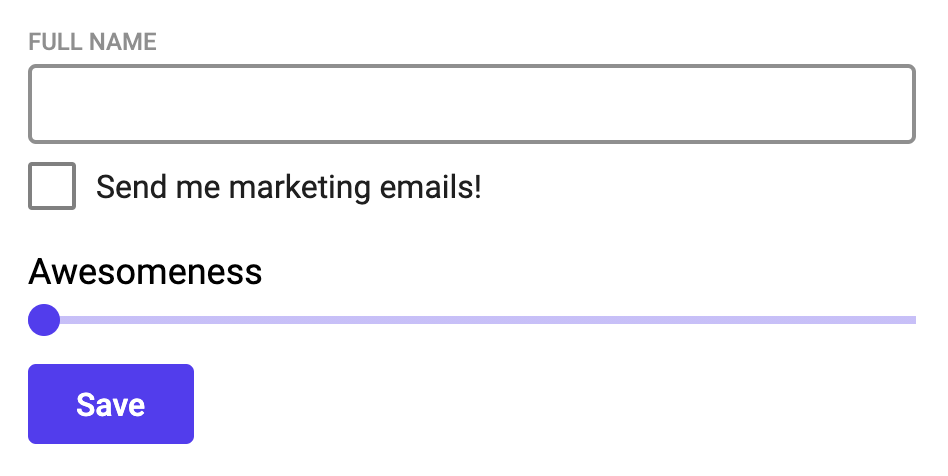 We will keep the information about a user (full name etc) in an Object and we can edit the object using the following simple component. Here you can see that the Object Id is provided as an input to this component. An Object node is used to "read" the data and connect it to the UI Controls, this will populate them with the correct data for the object when the Object Id changes. The properties are then written to the object when the Save button is clicked using the Set Object Properties node. 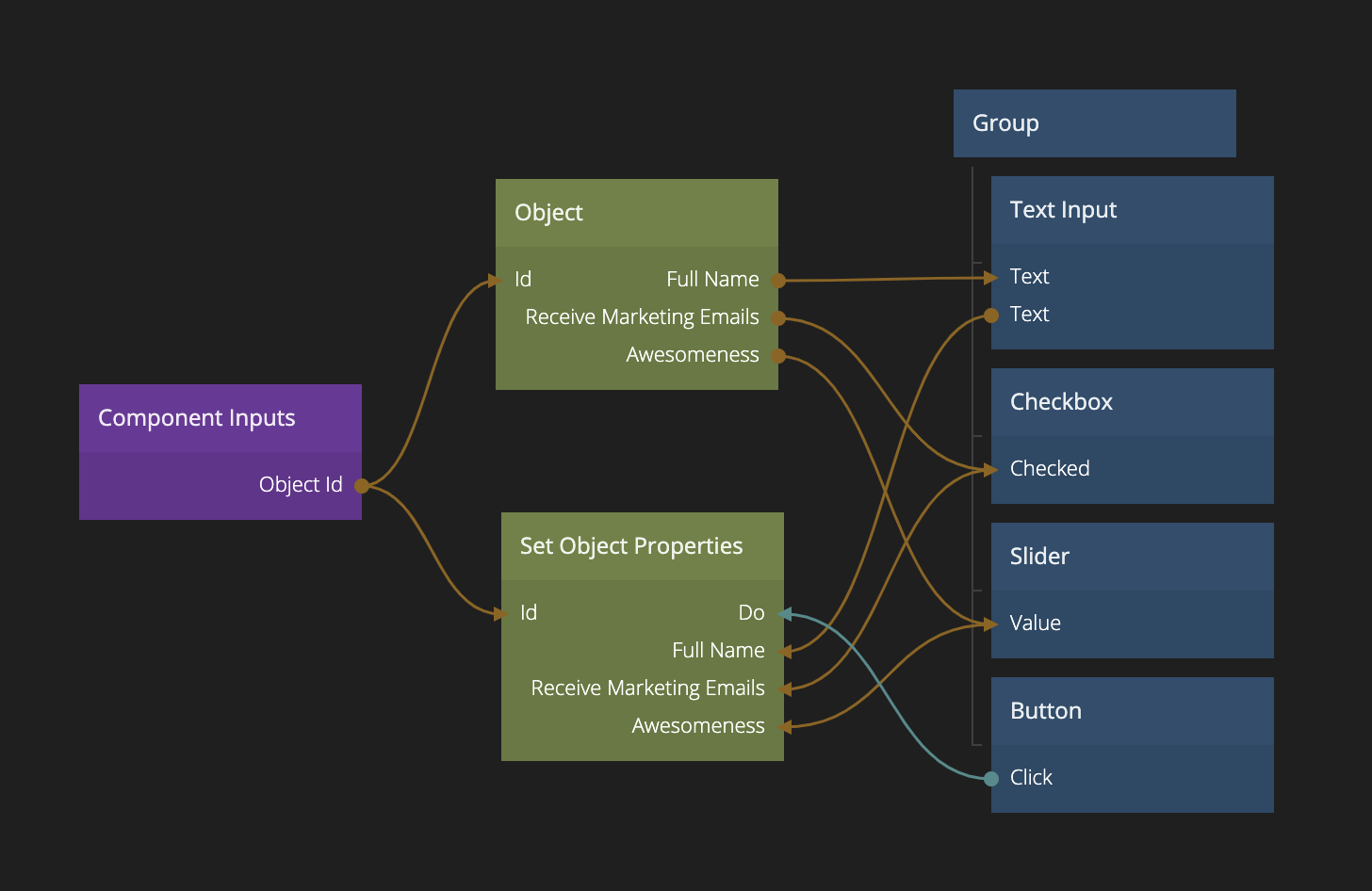 A very common pattern in web apps is CRUD (Create, Read, Update & Delete) user interfaces. This is you have a list of objects and you want to be able to create, read, update and delete these objects. Let's extend out form into a full CRUD user interface.

To begin with, we'll add a few small things to our Form component that we created above. First we will expose the Mounted property on the root Group node as an input. This will allow us to control the visibility of the form when using it in our CRUD interface.

Then we end up with this. This is now our Form visual component. It will be used both for editing and creating new objects. 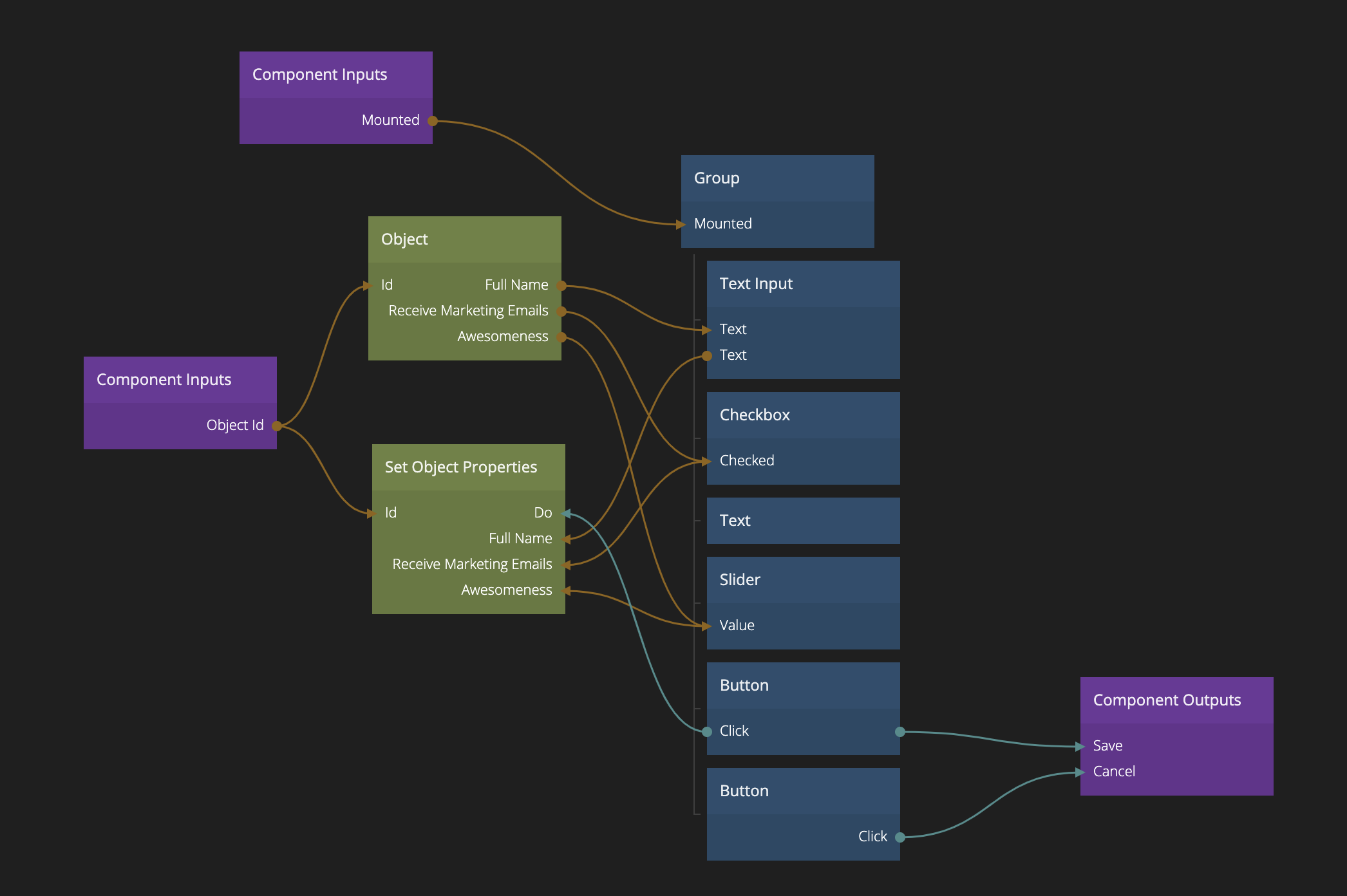 Now lets start on a new component, let's call this one Members List. Imaging the we want to manage a list of members with their name, if they want our marketing email and their general awesomeness. First we create the members list. We won't cover things like repeaters in detail in this guide, check out the list guide. 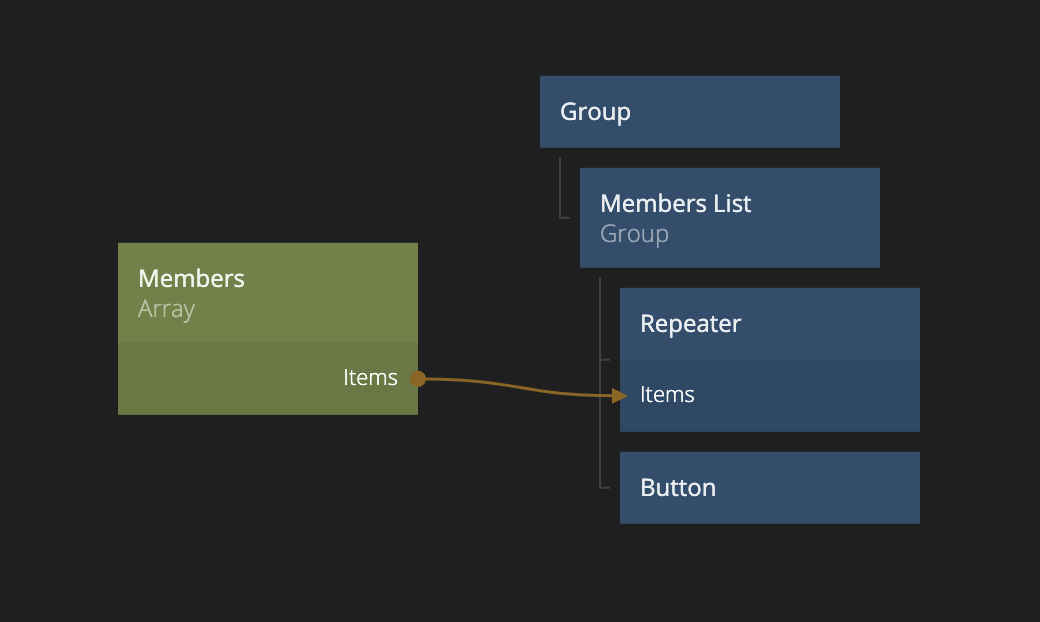 We have a Repeater node that is connected to an Array that we have given the Id "Members". This array will be empty to start with. We also have a button that we will later use to show the create form. We also need a Member Item that the repeater will use as template.

In the Member Item component, we simply show the full name of the object, and we include a delete button.

Now, let's add the form component to our Members List component to support creating new members. This is what that looks like: 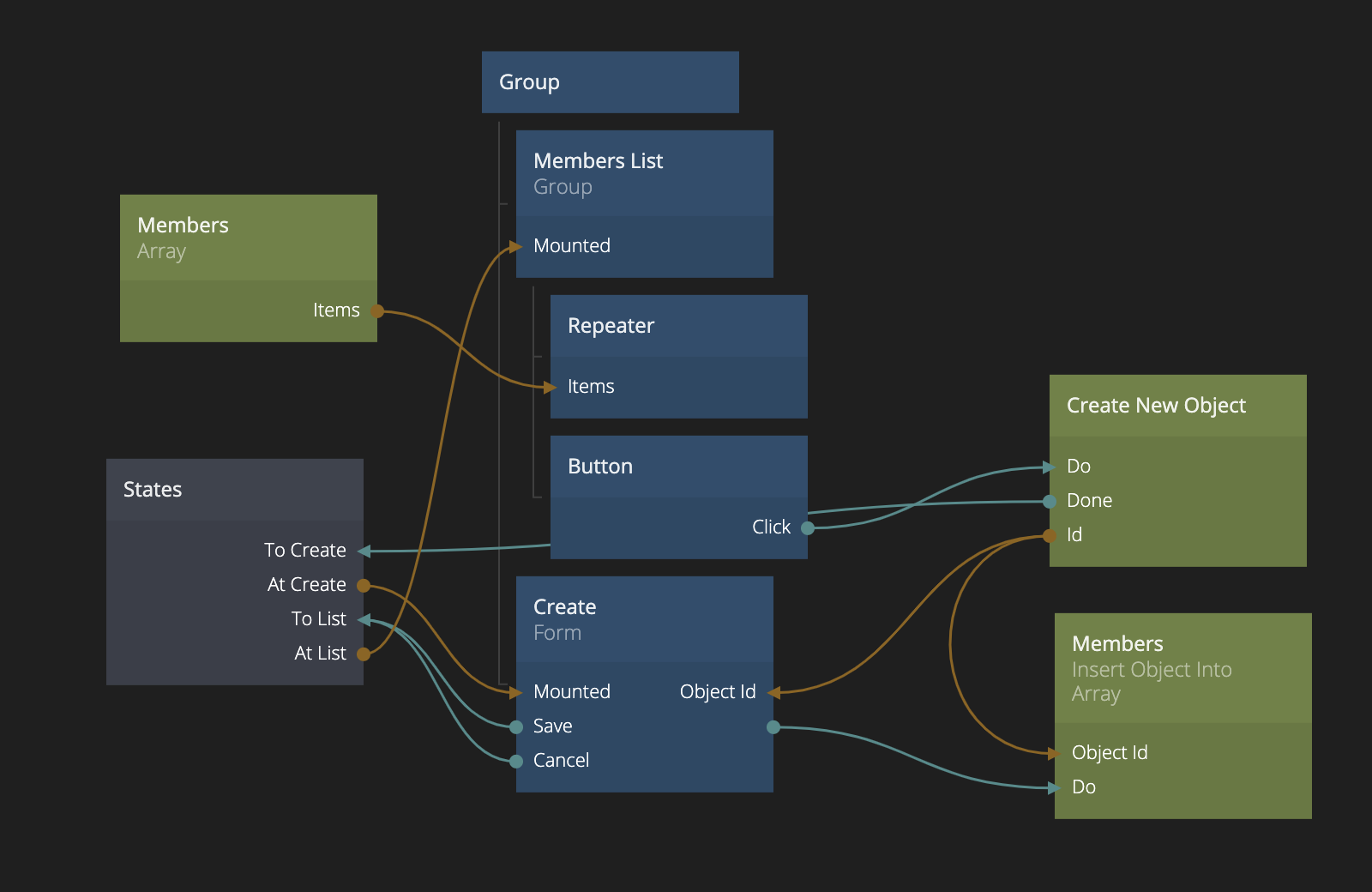 Phew, now we have the create part in place. Let's add the read and update part as well. For that we will just first add a small thing to the Member Item component. We will send an event with the Send Event node when the text label is clicked, and we will pass along the object Id of the clicked object. 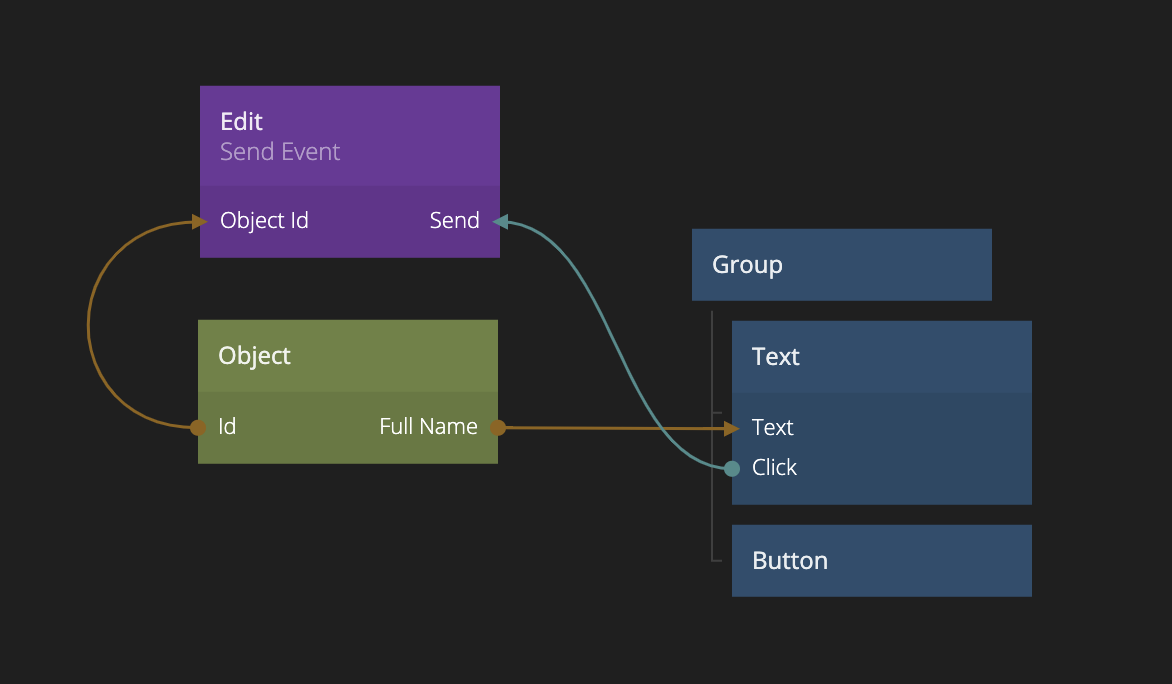 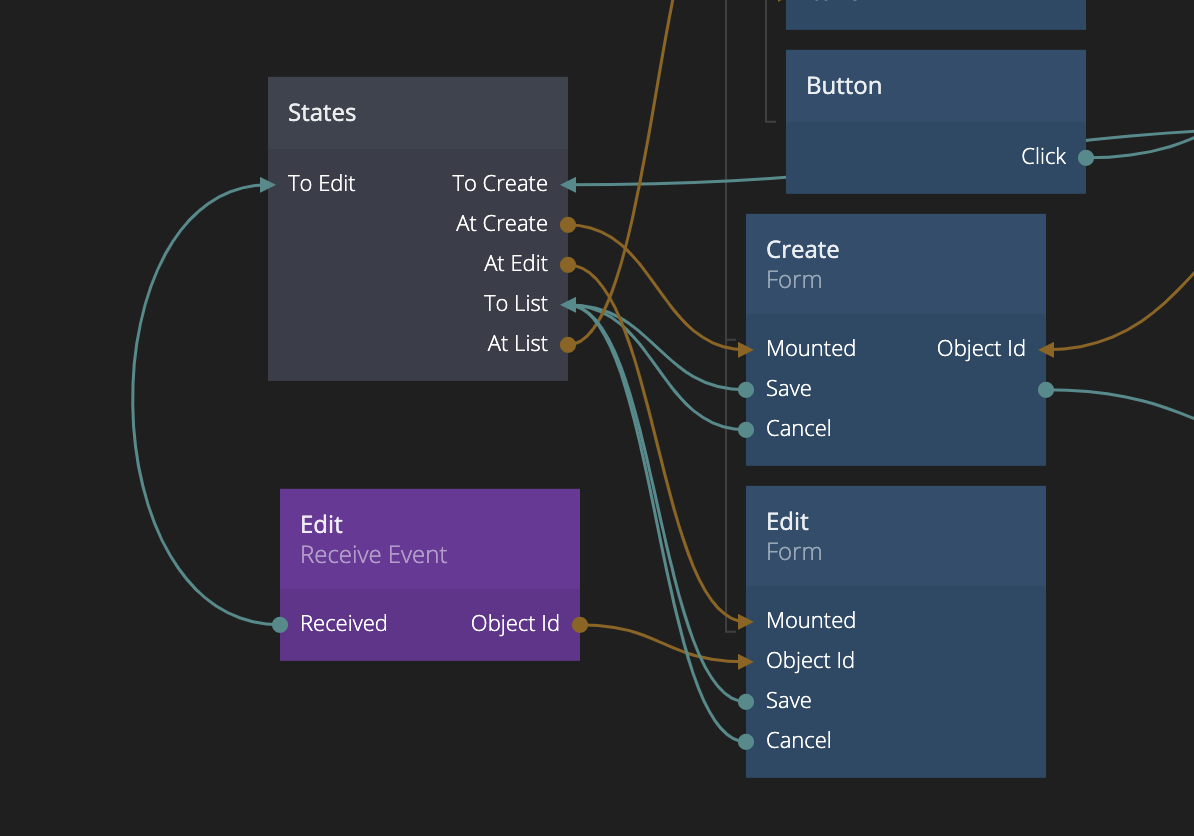 Now that we have both create, read and update in place this is what we end up with in the Members List component. 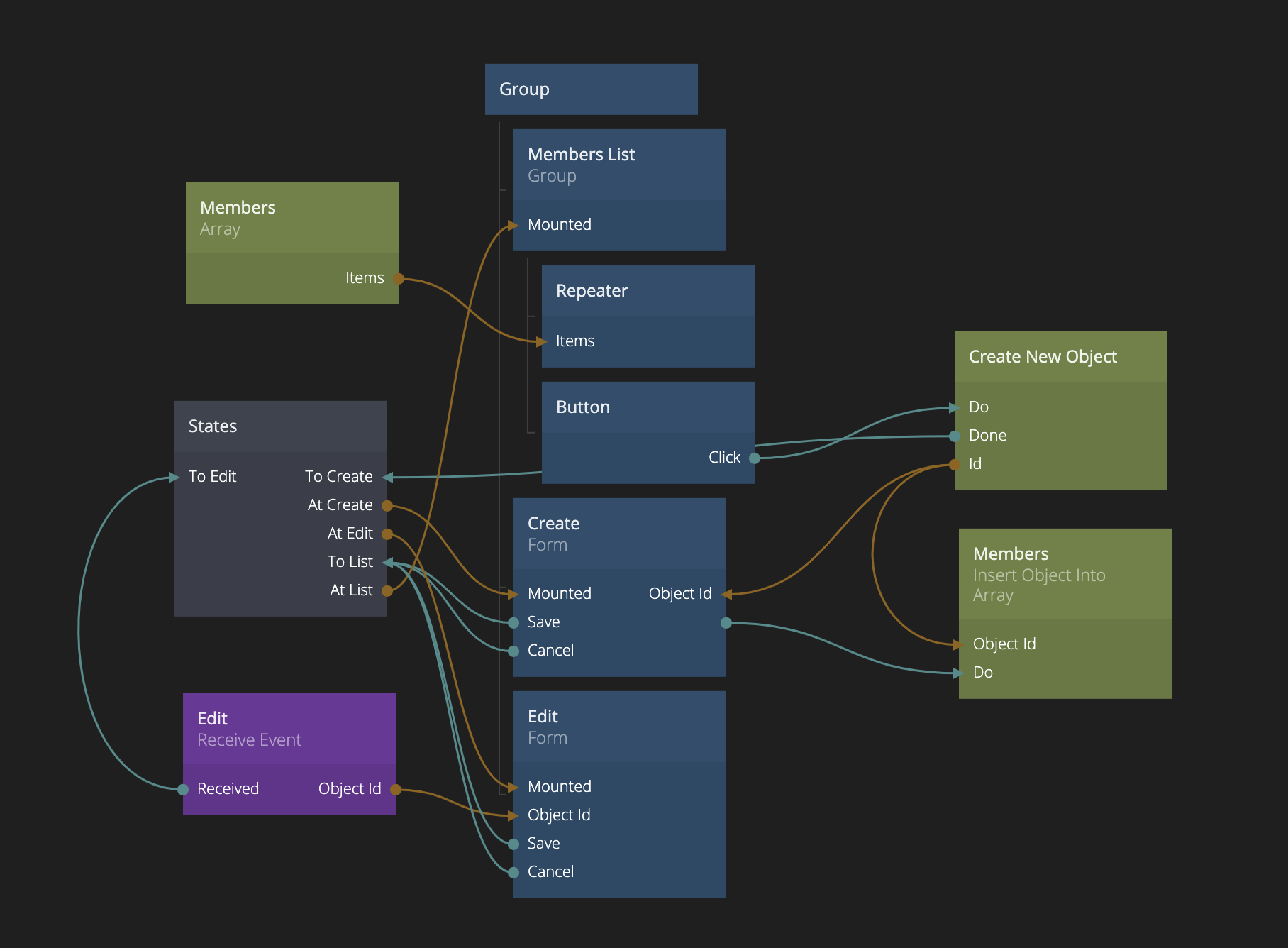 Now we just have one final thing left, and that is to hook up the delete button in the Member Item component. That is pretty easy to do, we simple connect the Click signal to an Remove Object From Array making sure the we specify the array id Members that we used in the Members List component (so we are changing the right array) and then provide the object Id to remove as well. 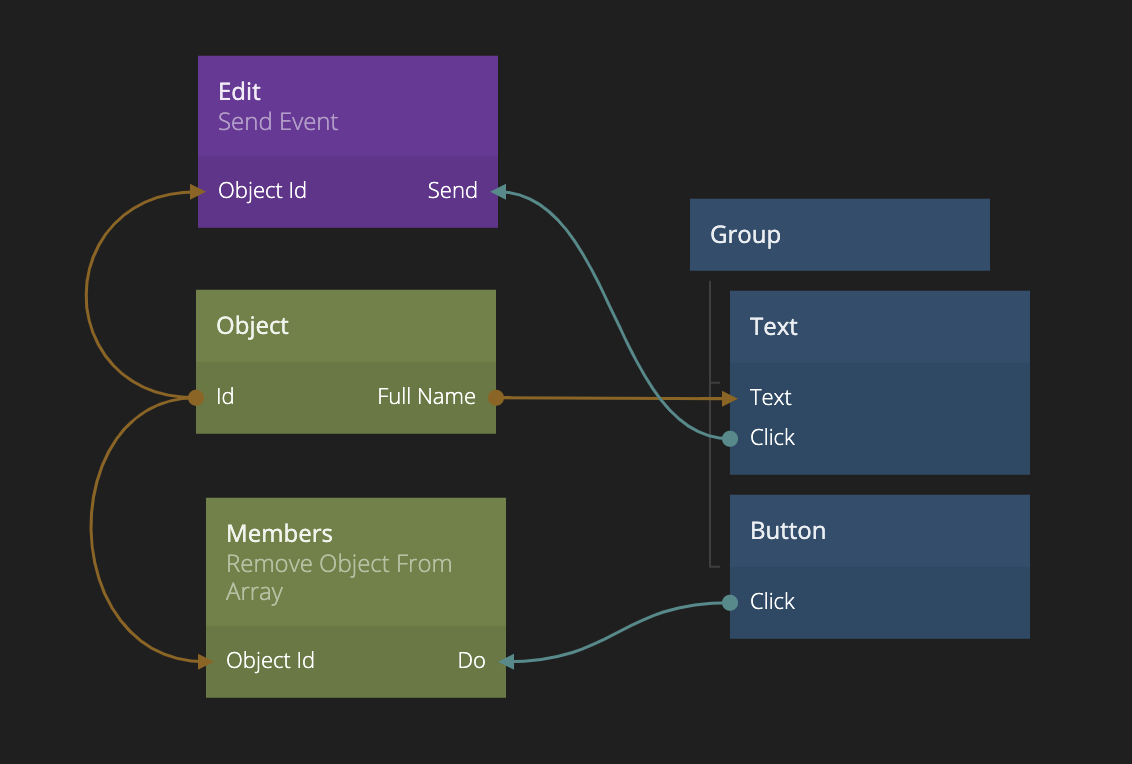 And there we go, now we have create the a fully functional CRUD user interface: