This guide covers an important concept in Noodl called Events. Events are used to send and recive signals with accompanying data. Signals are sent from one part of the node graph to one or many other locations in the graph. This is often useful when a user interaction occurs in one place of the app, such as the click of a button, that should trigger an action in a different place, e.g. a popup showing.

This guide will teach you how to use the Send Event and Receive Event nodes to pass signals and data from one place in your node graph to another.

In the example above, the Click signal of the Text node is connected to the Send input of the Send Event node. This will trigger the an event to be sent when the text is clicked.

An event is sent to a certain Channel which is specified in the properties of the Send Event node. In this case the name of the channel is Show Popup.

The event signal is passed to all Receive Event nodes that share the same Channel. In the example below the event that was sent above is received.

To illustrate this you can see below how when the click signal is sent via the Send Event node, it is passed to the Received output of the Event Receiver node.

So far we have seen the basic concept of the events mechanism in Noodl. Next, let's take a look at how you can pass data via payload connections to your event nodes. You start by adding ports to the Send Event node. You can add any number of ports for the data that you want to pass with the event. 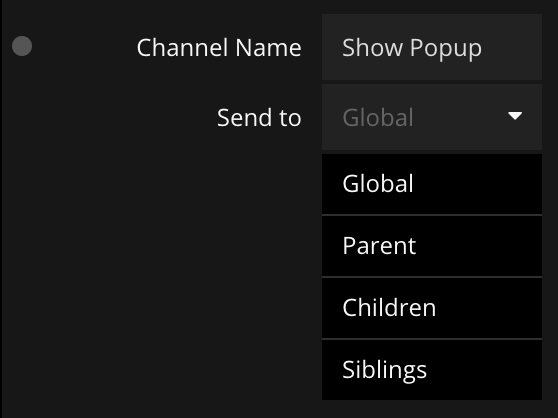 The Children mode will send the events to all the children in the component where the Send Event node is. So in the example below, the event will first be sent to My Child Comp followed by any children that node may have. When all descendants of My Child Comp node have received the event it will pass it to all children that are dynamically created by the Repeater node, and their descendants.

The Siblings mode will pass the event to all other nodes that are on the same level as the node where the originating Send Event node is. So if for instance the My Child Comp in the graph below contains a Send Event node that sends an event to its siblings all other My Child Comp nodes will receive it, except for the one sending the event, followed by the child instances dynamically created by the Repeater node.

The final thing to know about propagation is the Consume property of the Receive Event node. If that property is checked it means that when that particular node receives an event it will stop the propagation. So no other Receive Event nodes after that one will receive this specific event.