Interacting with the Mapbox Module

This guide will teach you how to implement basic interactions with your Mapbox map using the Mapbox Module.

If you haven't already looked at the guide for setting up the Mapbox Module, it's recommended to recommended to do that before starting this guide. You can find it here.

We will go though the following steps:

There is also a video walking through the guide.

Getting the position that the user clicked​

If we start out with the same super simple app as in the previous guide we can start adding some interactions to it. 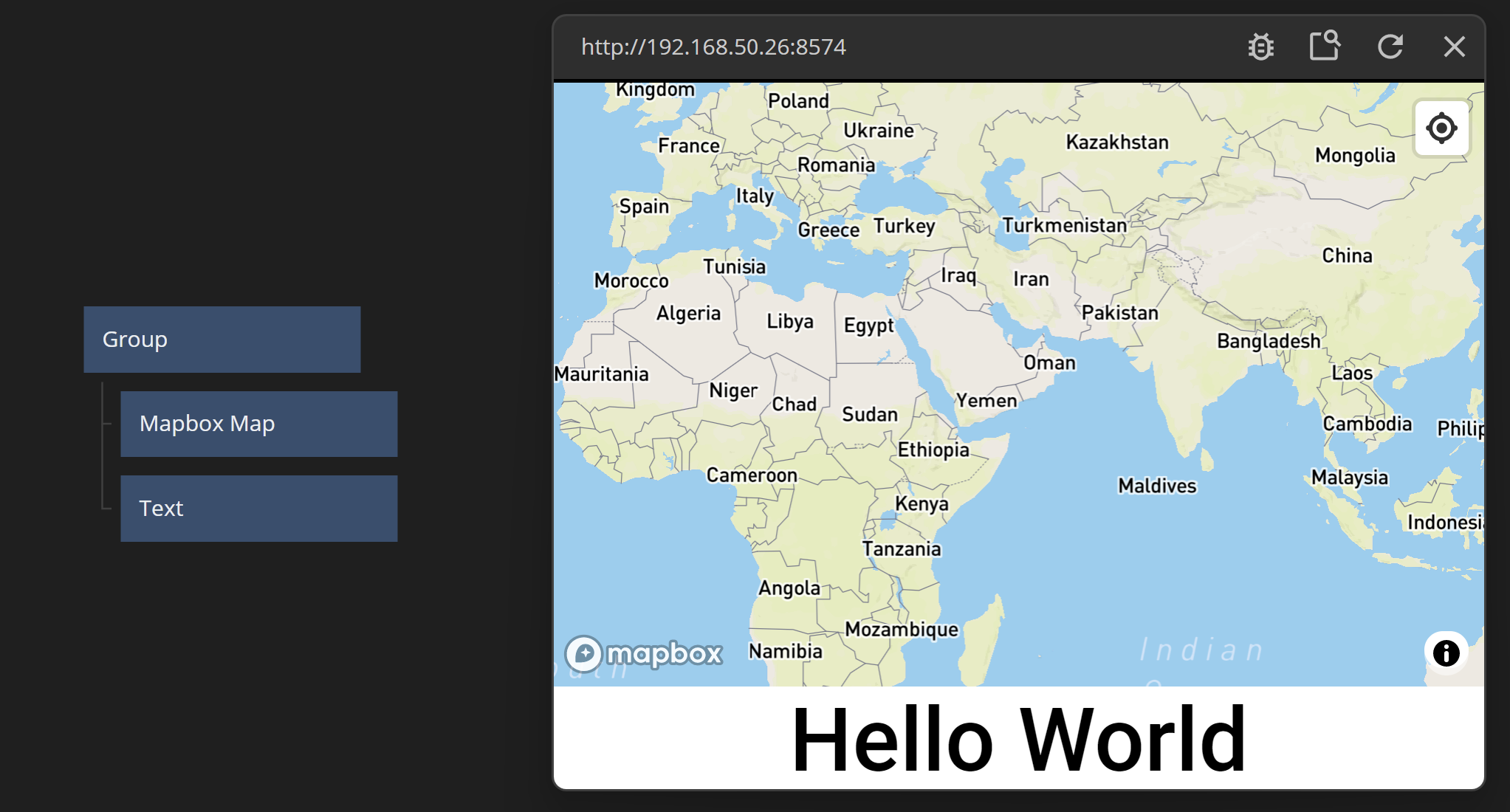 Let's first remove the "Hello World"-text. Instead we replace it with a panel. We will build it using a Group node. So add a Group node at the bottom of the node hierarchy. Name it "Popup Panel" for readability. 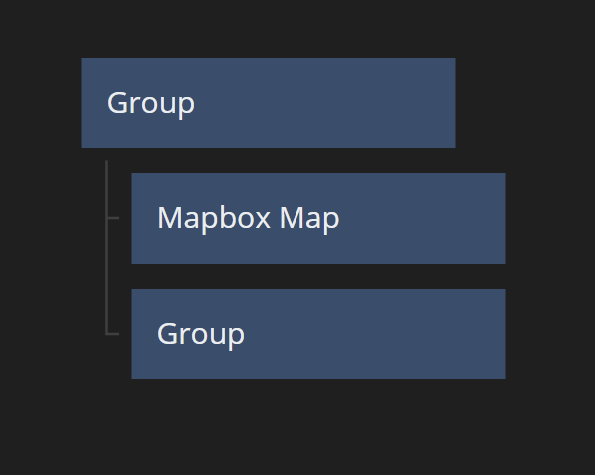 We want it to float on top of the MapboxMap so change it's Position to Absolute. Center it and dock it to the bottom using the Layout controls. Set a size of 300 pixels wide and 100 pixels high for now. Give it a bottom margin of 20 pixels to give it some space.

Also make it white, with rounded corners of 10 pixels and a 2 pixel outline of a dark grey color. Also tick "Shadow Enabled" to make it a little nicer visually.

Now you should have a panel floating on top of the map. 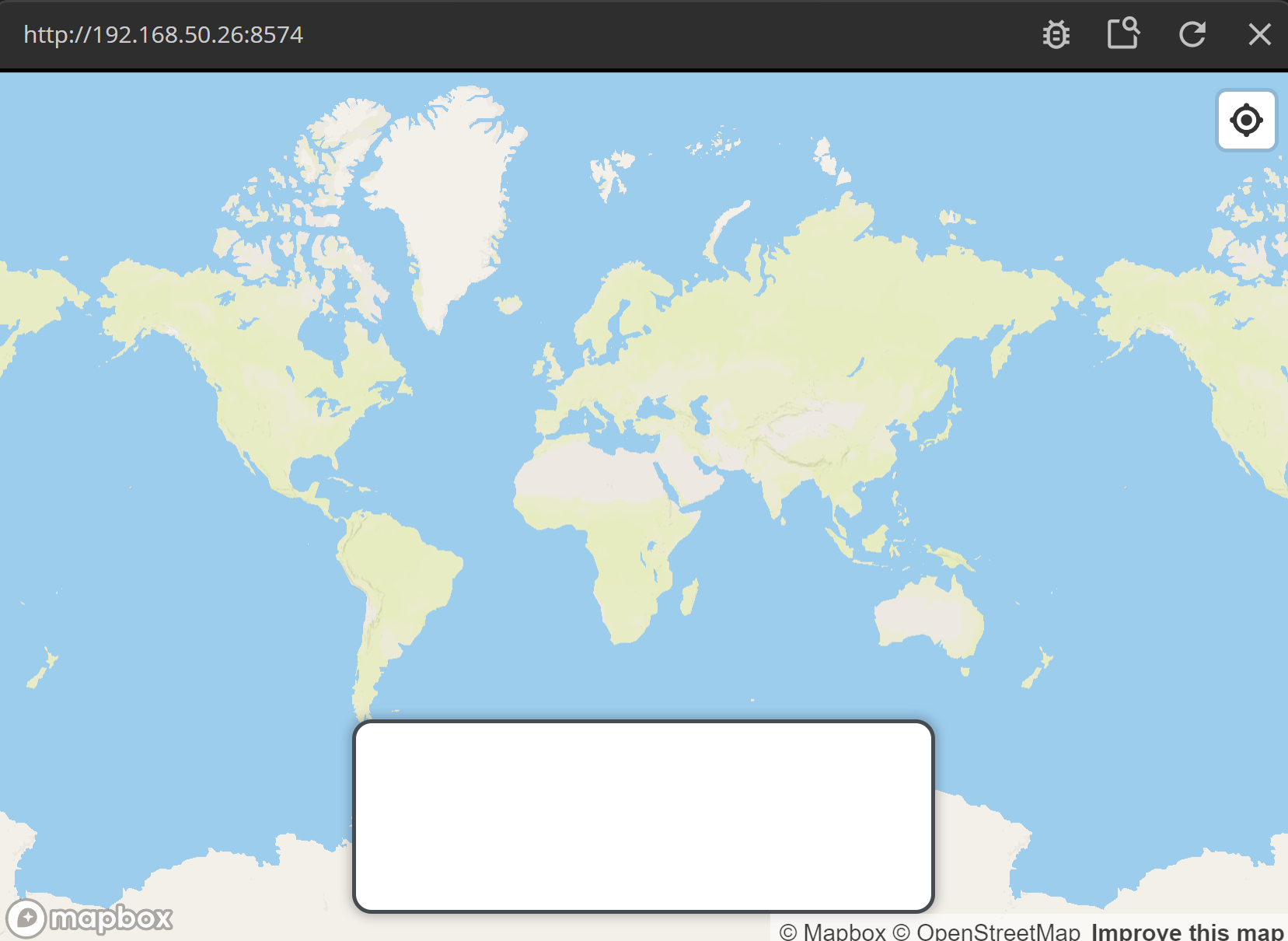 We want to print out the geographical location in the panel, i.e. the latitude and longitude of the position the user clicks.

Add two text nodes in the panel. Adjust the padding (horizontally and vertically) of the "Popup Panel" to 10 pixels to give the text some space. 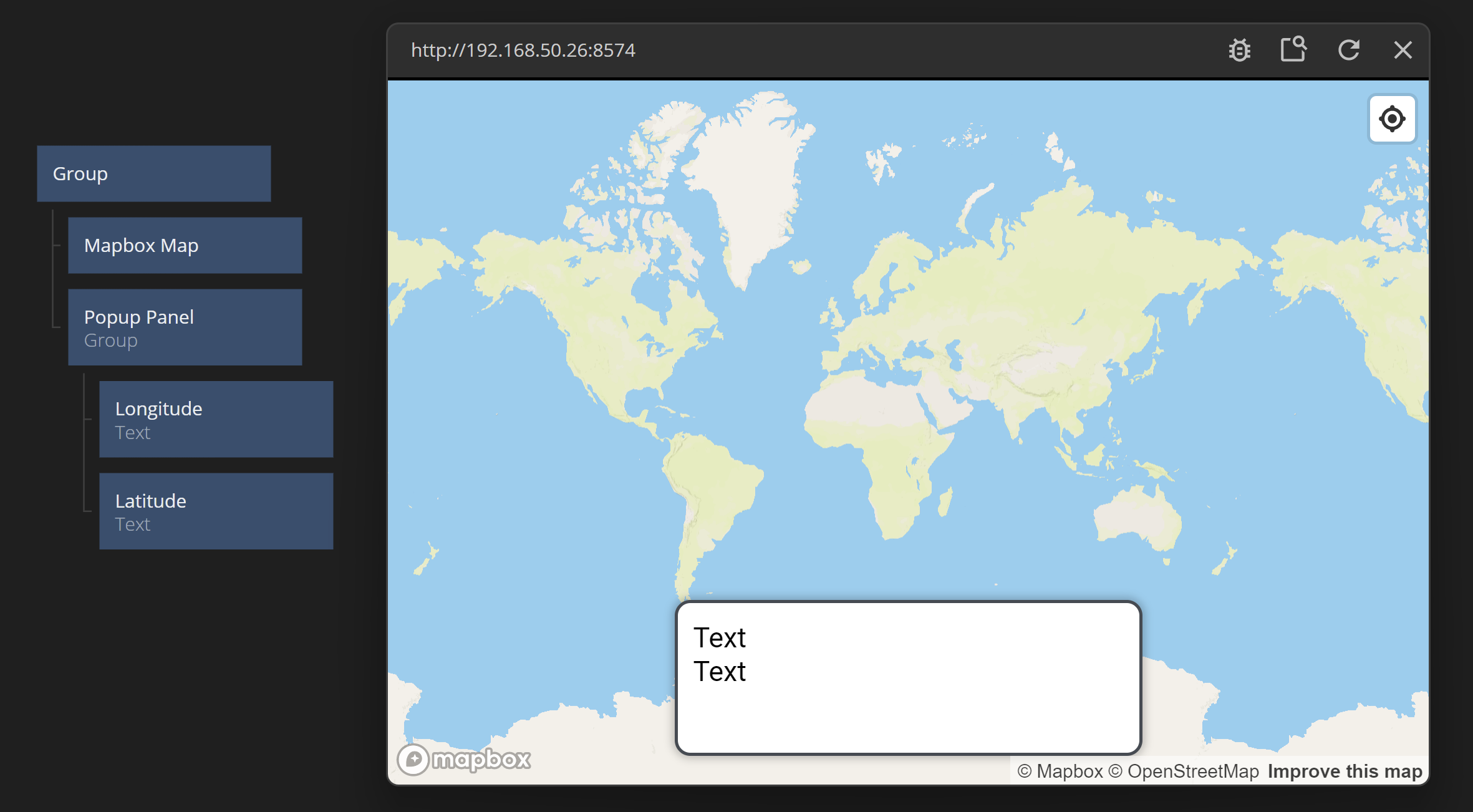 Then connect the two outputs "Longitude" and "Latitude" to the respective text. Make sure it's the one under "Mapped Clicked" Section since there are two other similarly named outputs that holds the current panning position of the map. 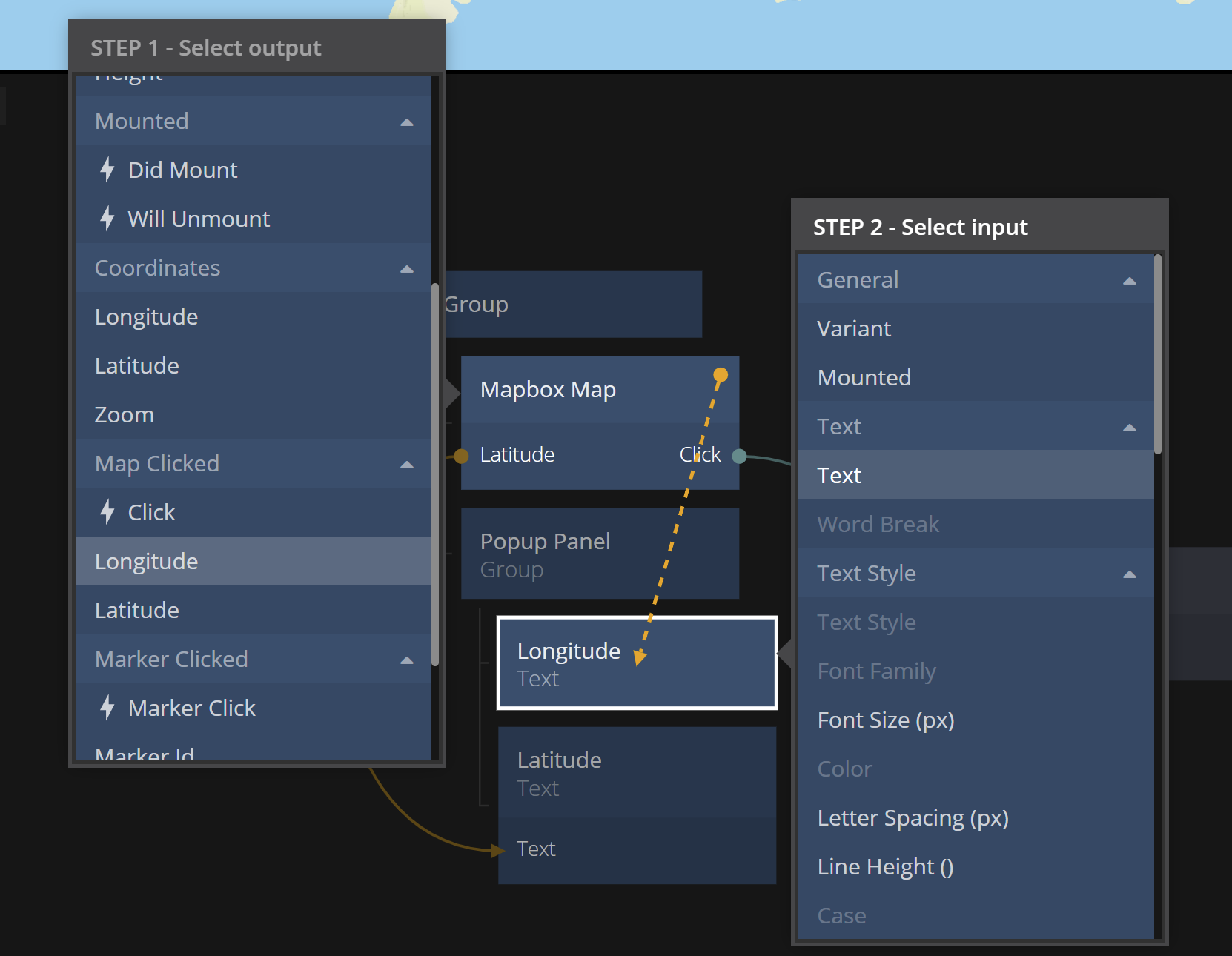 Now try clicking around in the map. You should see the two texts updating whenever you click. 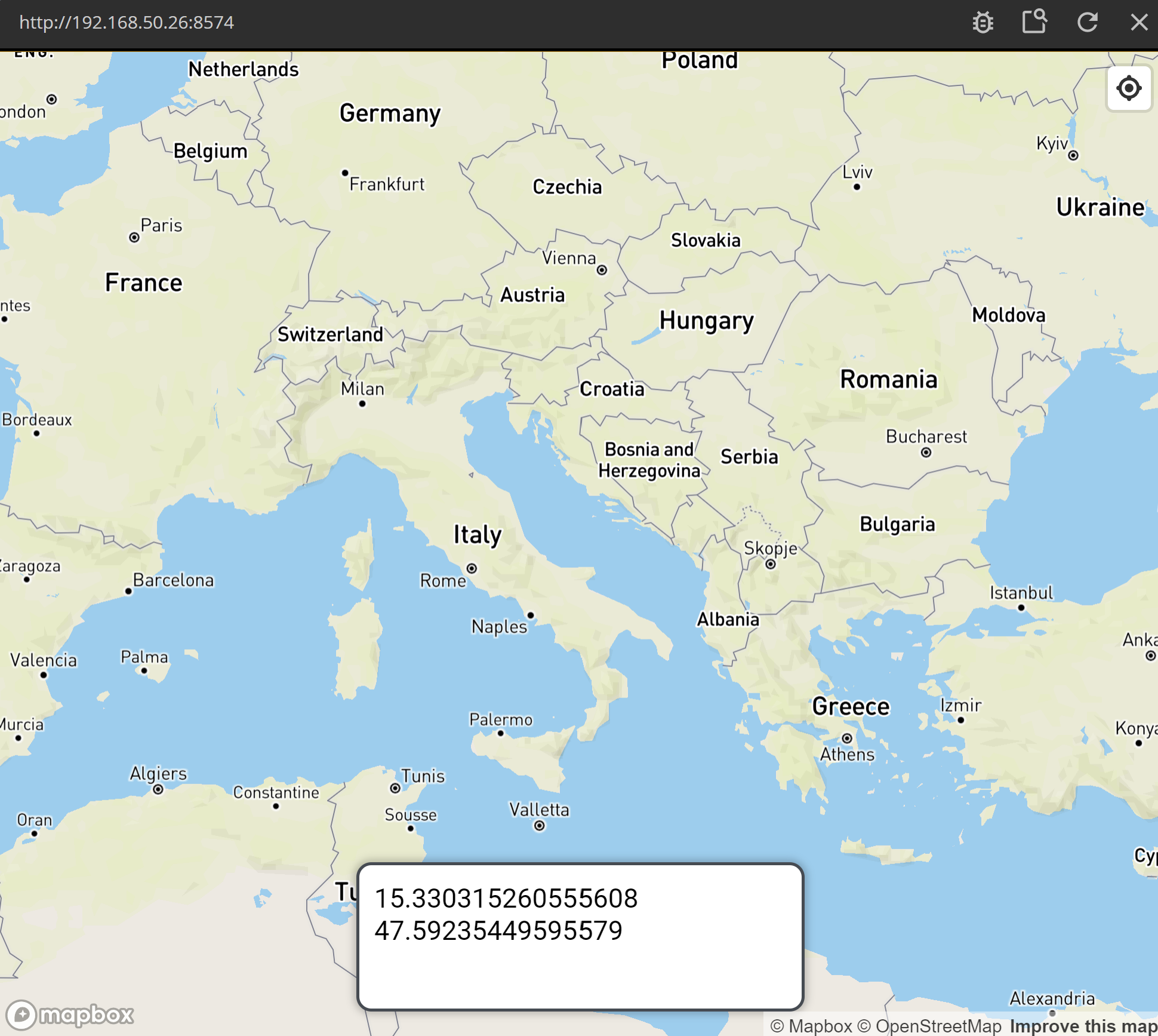 Now let's add some behavior to the panel. We want it to appear from the bottom when the user clicks on the map. Then, when the user starts panning or zooming in the map. To do this we are going to use the Click and Map Moved signals.

Finally hook up the outputs Click and Map Moved signal to change the state between "On Screen" and "Off Screen". Feed back the output "Y Position" to the Pos Y of the panel. 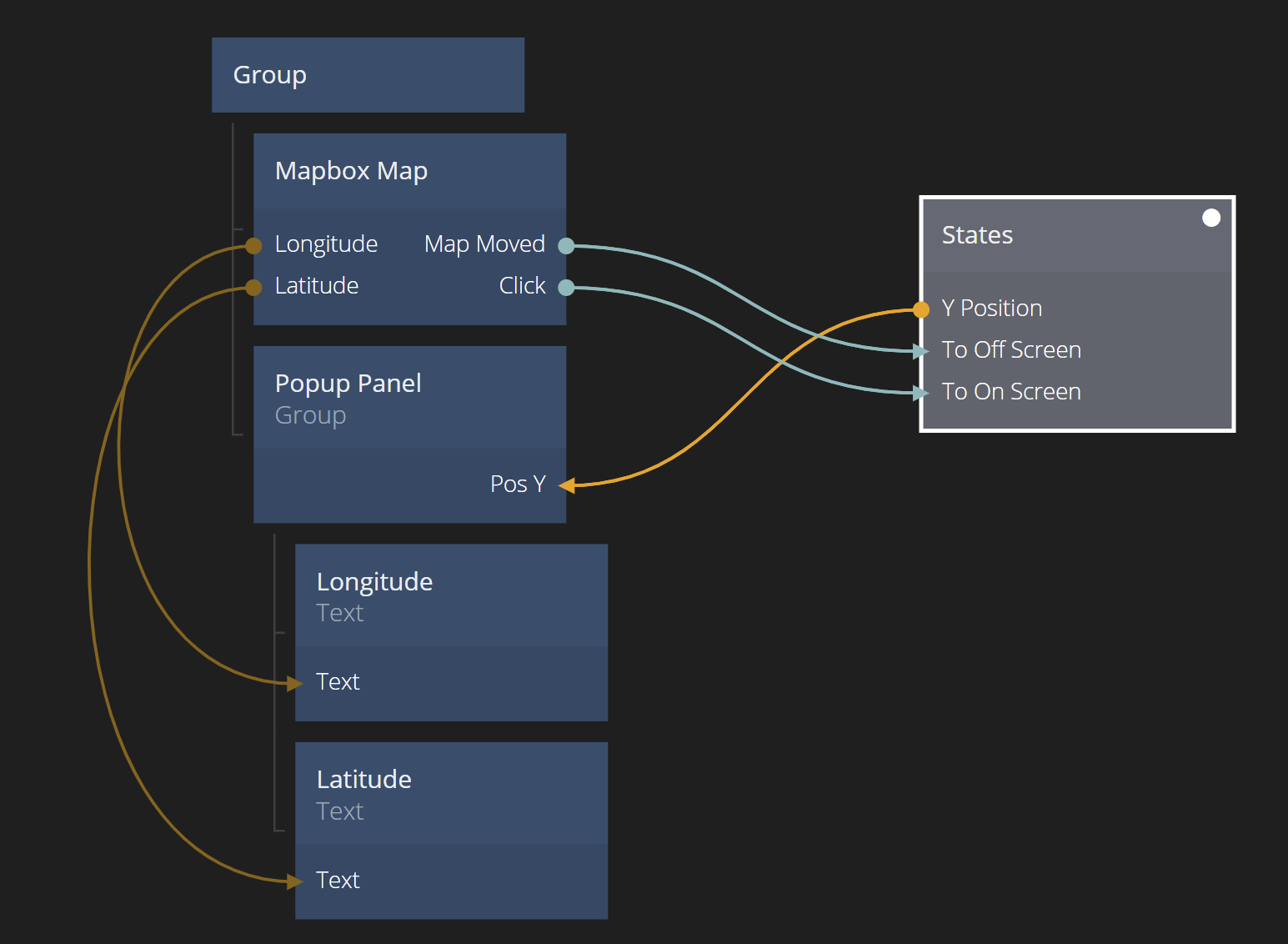 Now you should be able to move around and click on the map, showing and hiding the panel printing the longitude and latitude.

If you want to import the final project, click the "Import" button below and follow the instructions.