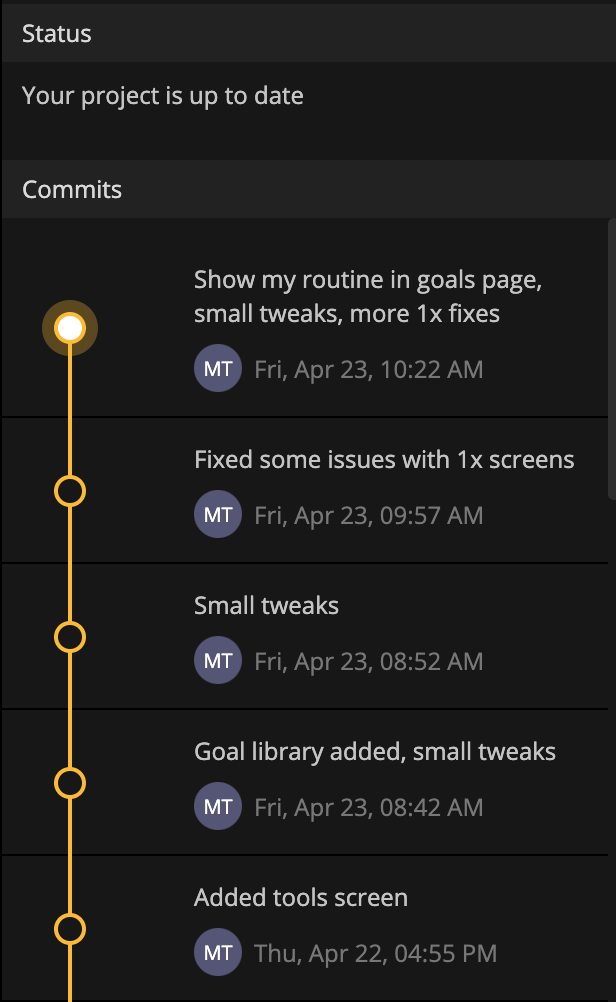 Noodl uses Git as the underlying version control system. The project folder is a git repository. Users comfortable with git can use external git clients to view their Noodl projects.

Projects will automatically get a version control repository in the cloud, but will only be available to others when the first push has been done.

The version control panel is where you perform all actions related to version control. This includes actions such as pushing new changes to your collaborators, pulling down the latest version, seeing differences between versions, merging branches, and more. 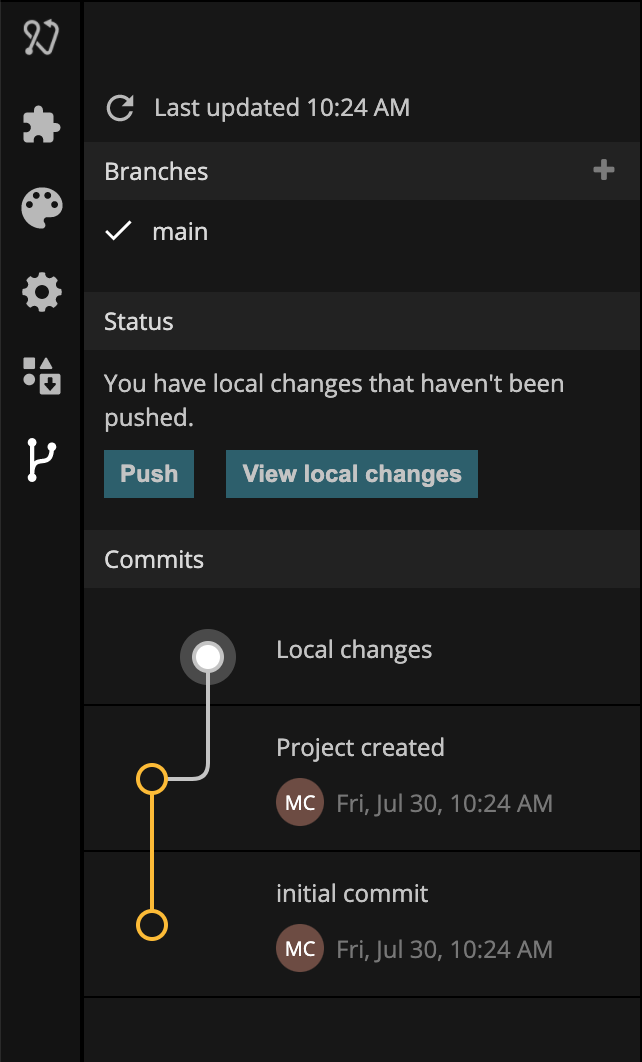 When there are changes in your project and you want to share them with your collaborators you click the "Push" button.

Noodl will now show you all the components and files that have changed, and by clicking them you can see the difference compared to the previous version.

After the changes are pushed you can see the new version in the version list. 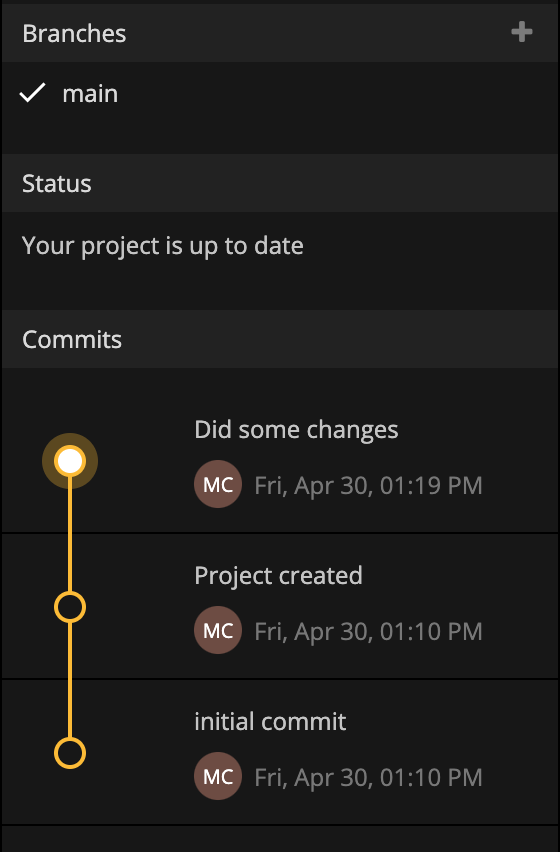 Noodl automatically checks if there are any changes to pull down when the version control panel is opened.

A new version will show be displayed as dimmed items in the version list. These are versions that you haven't pulled down yet. 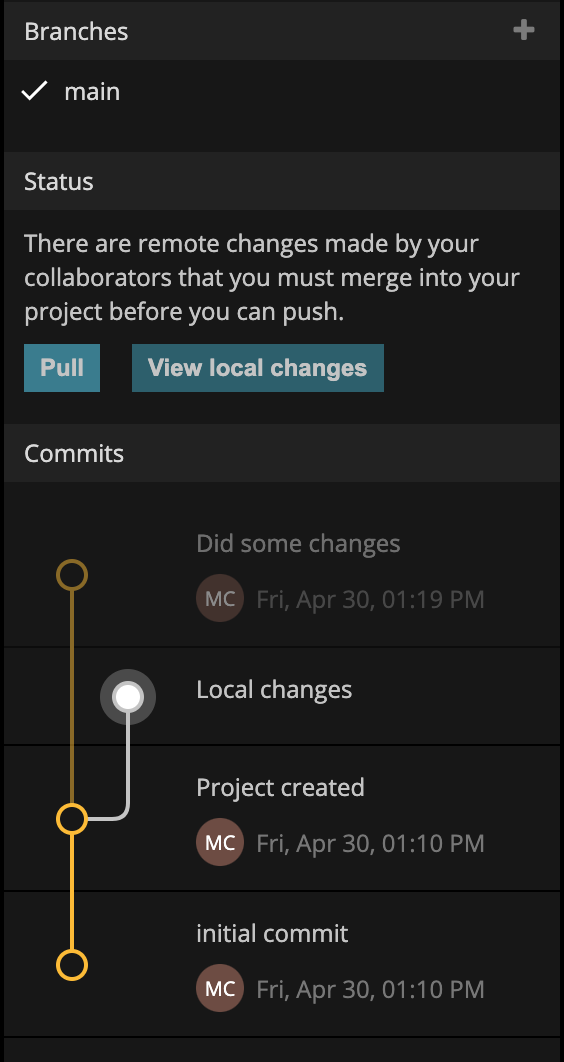 Any local changes you have, that aren't pushed, will still be there after pulling down a new version. They will be applied to the new versions, which leads to the next subject, conflicts.

Sometimes you and your collaborators might change the same parameter on the same node. In those cases, Noodl doesn't know which change to apply and will ask you to resolve the conflicts. 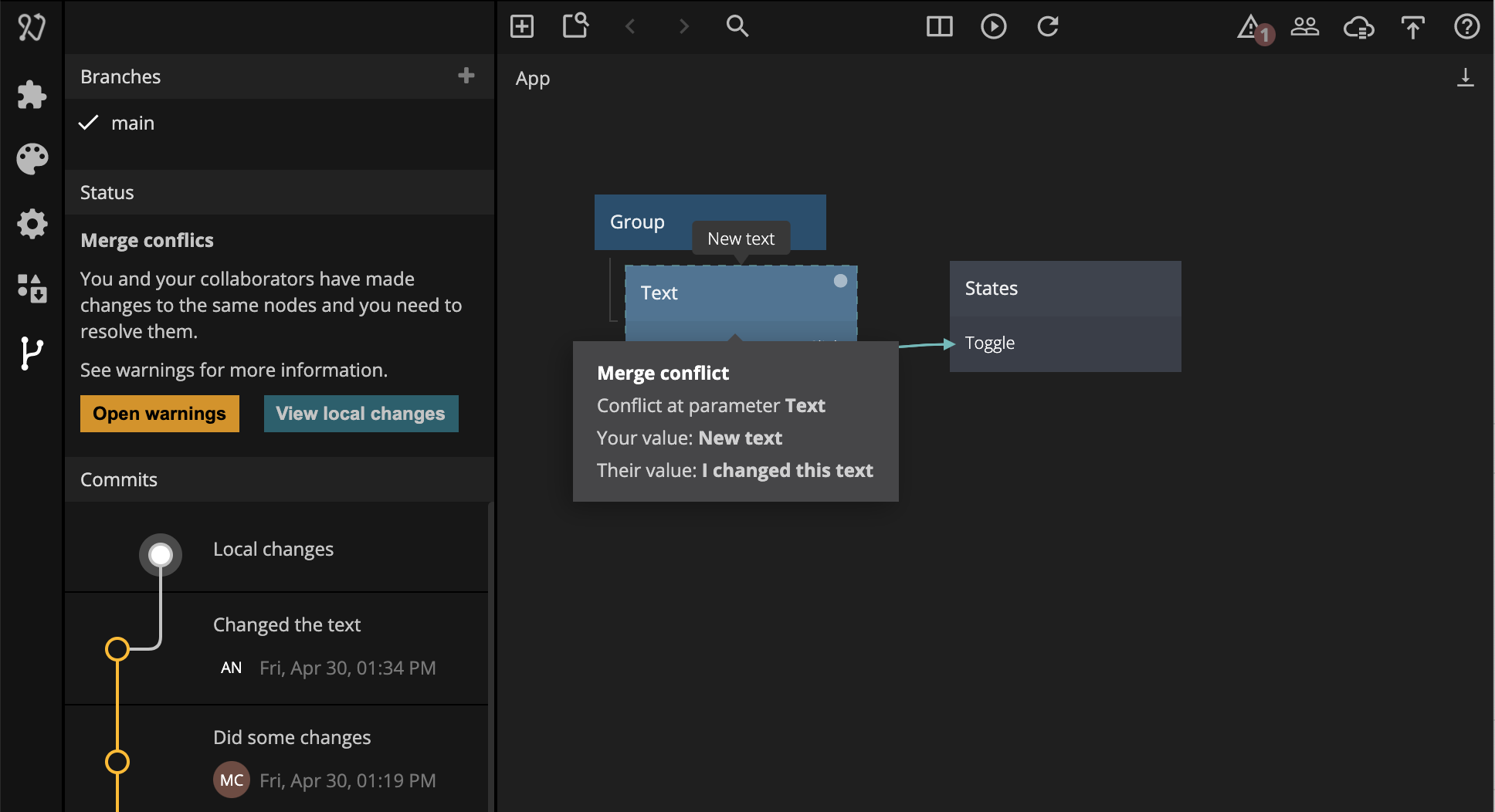 You can resolve conflicts by choosing to keep your change or overwrite your change with the one from your collaborator.

Branches can be used to develop different parts of your application in parallel, that can later be merged.

Here are a few common use cases

Create a branch by clicking the '+' icon in the version control panel's branch section.

After a branch has been created Noodl will switch to the new branch. Any changes in your project that weren't pushed will be moved to this new branch.

Changes you push will now belong to the new branch, and won't affect the other branches.

Changes from one branch can be merged into another branch. In this example, the "my-new-feature" branch is being merged into the "main" branch. 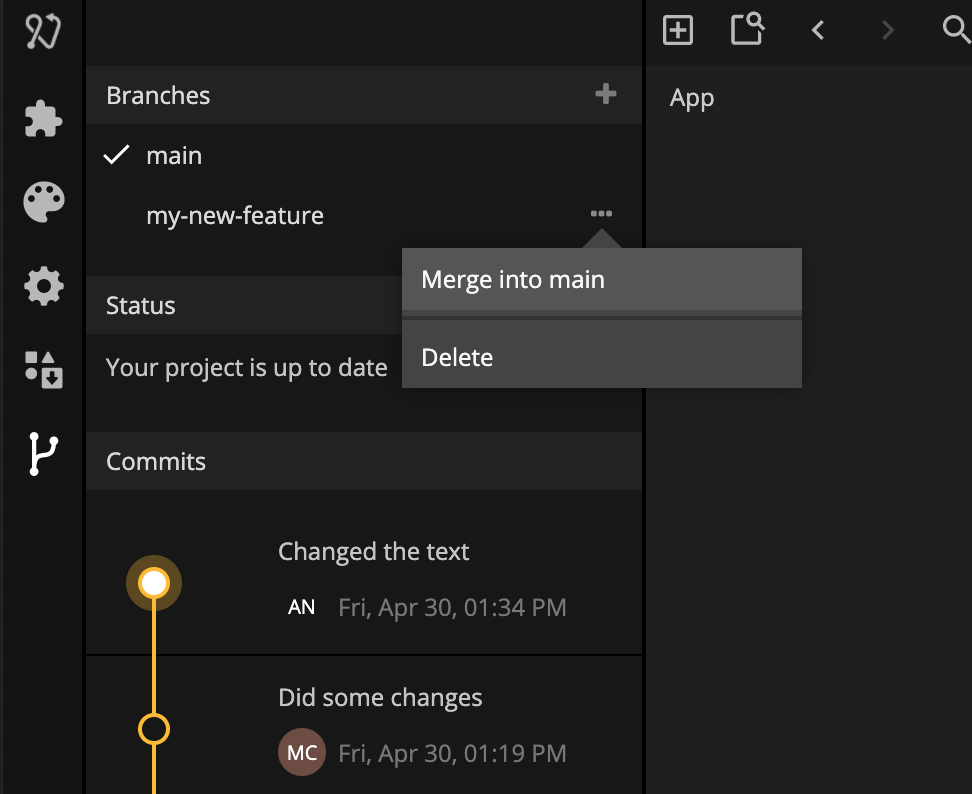 Clicking "Merge into main" will show a preview of the changes that are being merged in. Noodl is visualizing the changes as they will look after the merge has been done. 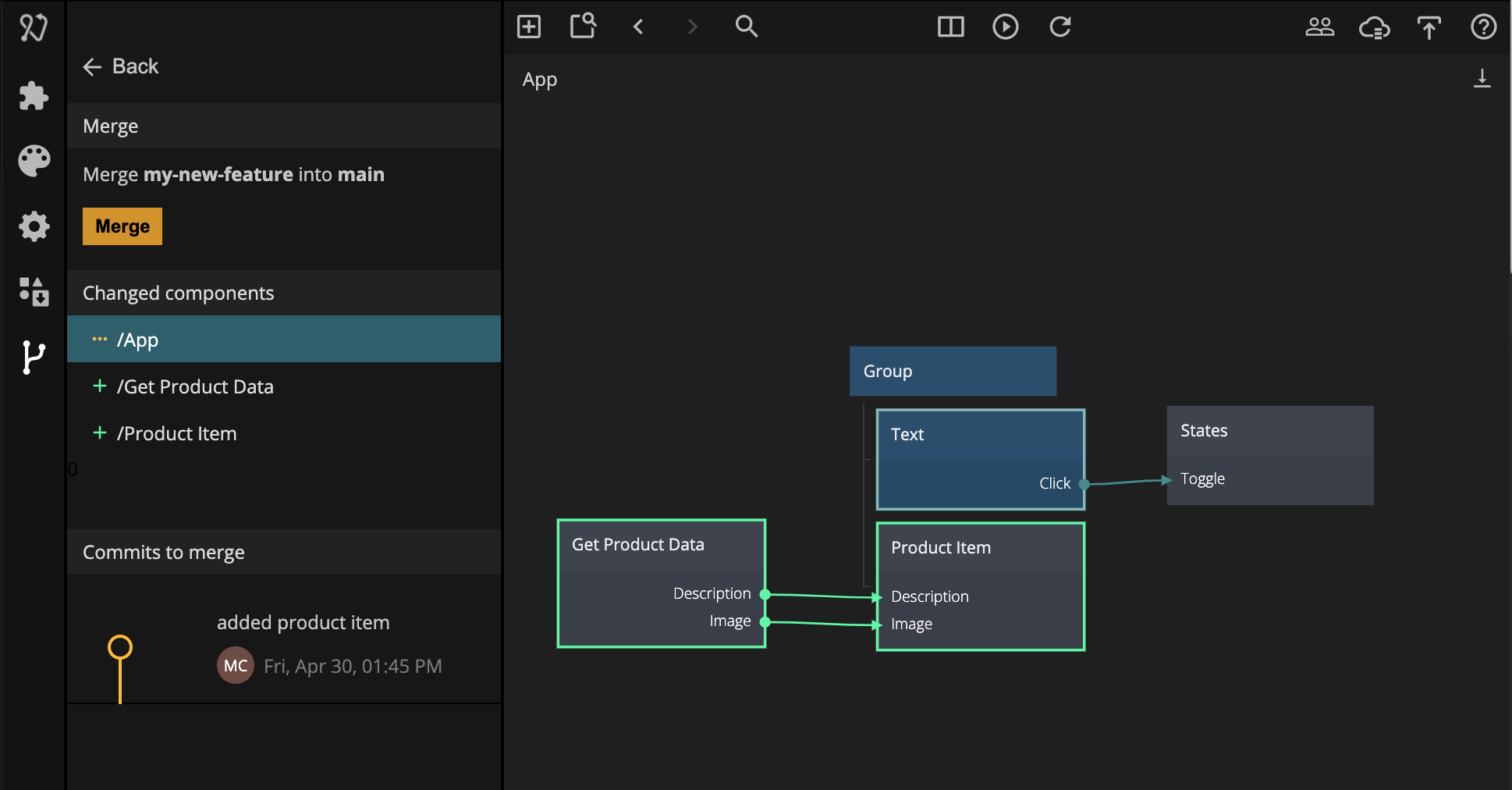 When the merge is done, it is done locally, and won't yet be shared with collaborators. You can now choose to push the changes, or reset all the changes and get back to the version before the merge, effectively undoing the merge.

Press "Push" to push the merge. Noodl will show you all the differences that you're about to push. 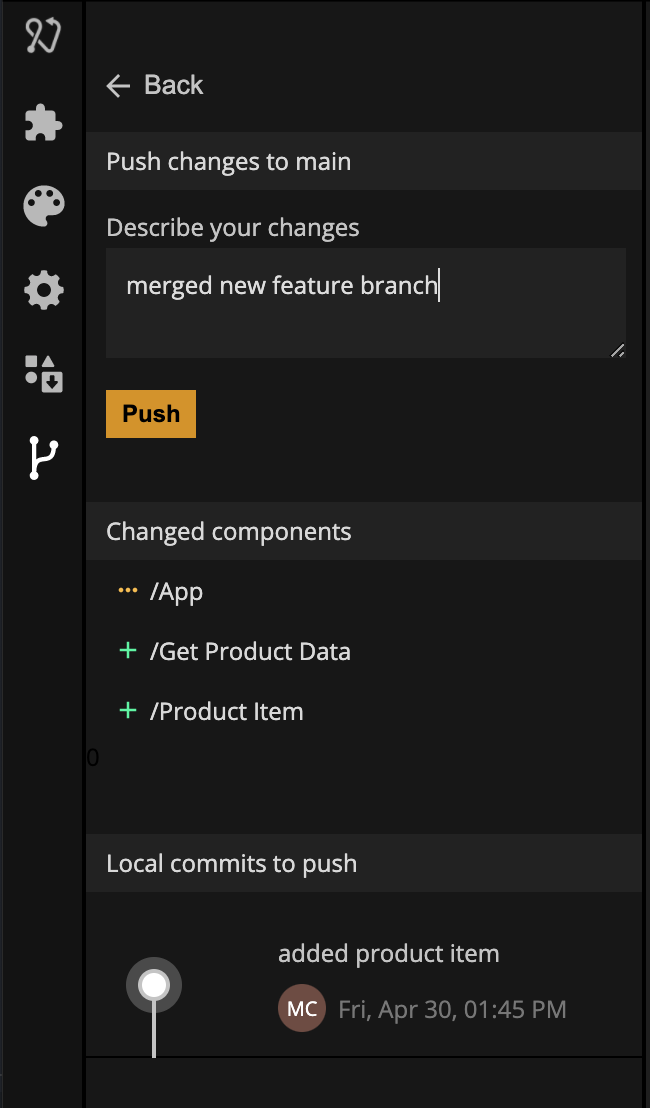 You can undo the merge by clicking "View local changes" and then "Reset all changes". 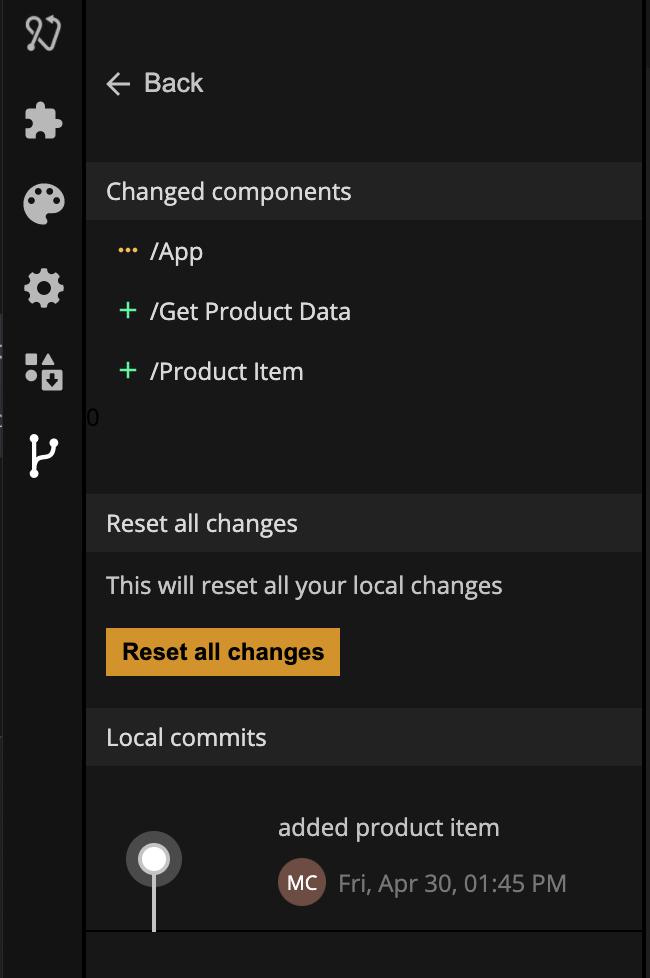 After a branch has been merged into another branch it can be a good idea to delete it if it won't be used anymore.

Note that deleting branches will delete branches both locally and remotely. If other collaborators have done work on the branch you just deleted, their local copy of the branch will still be intact and they can choose to push their changes to restore the branch.

The main branch can't be deleted. 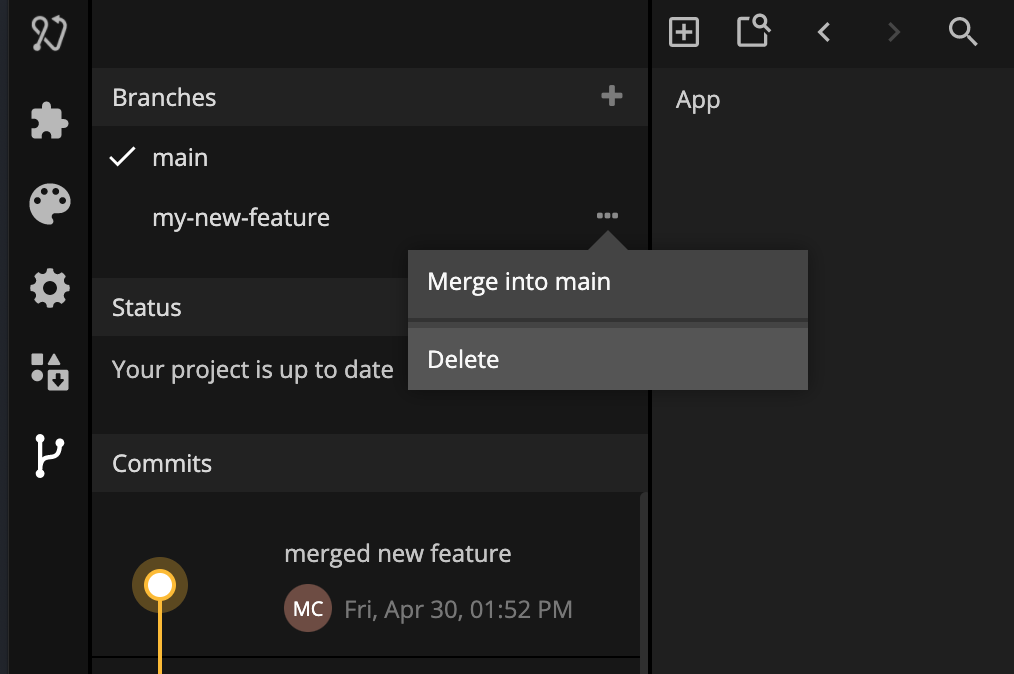