By now you should have a good understanding of how to create, update and query records in the database. If you feel the need to freshen up your skills, check out there guides.

By default all records you create are completely public, so they can be read and written by any user, logged in or anonymous. This is ok while you are developing your application but as soon as it is getting ready to be released outside of your team you will need to think about access control. That is who should be able to read and write which records. Fortunately there is a pretty solid way of achieving this in Noodl.

In this guide you will learn how to limit access control to records you create to certain users.

You can set the access conrol of a record when it is created with the Create New Record node or, you can update it later usign the Set Record Properties node. This is done using the access control rules part in the property panel. Here is an example below. 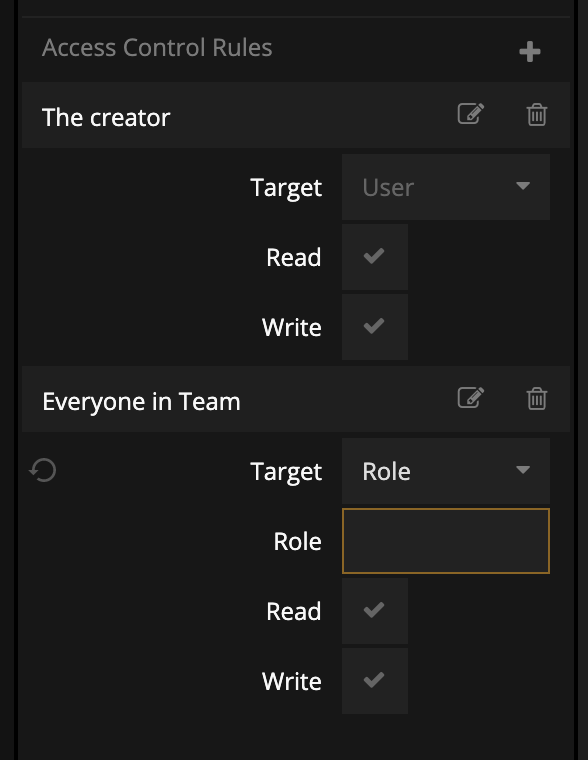 But when you place a new Create New Record node and view the properties the rules will be empty. You can create a new rule by clicking the (+) icon. 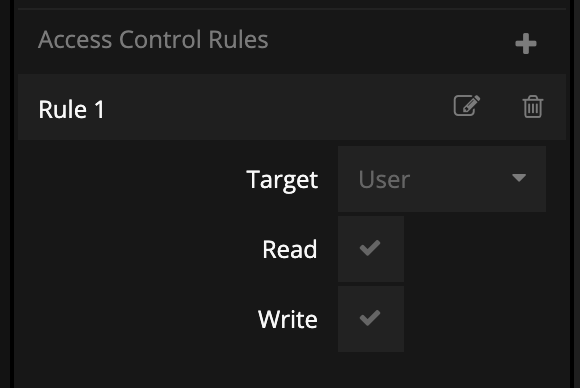 You can have how every many access control rules you want and each rule has a specific Target that you need to pick:

First let's take a look at a common rule where we make sure the user creating the record has access rights to reading and writing the record. 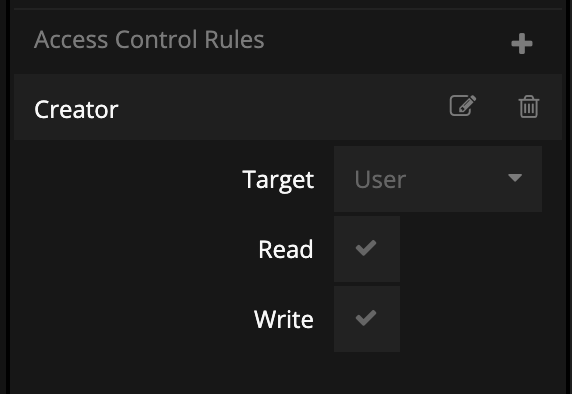 This is simply the default settings for the rule. It is recommended that you edit the label of the rule and give it a short descriptive name so that you know later what it is supposed to achieve. Ok so if we use this rule to create records only the current user will be able to access them. This requires that a user has been logged in.

Now let's say that we also want everyone to be able to read the records but not change them. Then we would add a rule with the Everyone target. 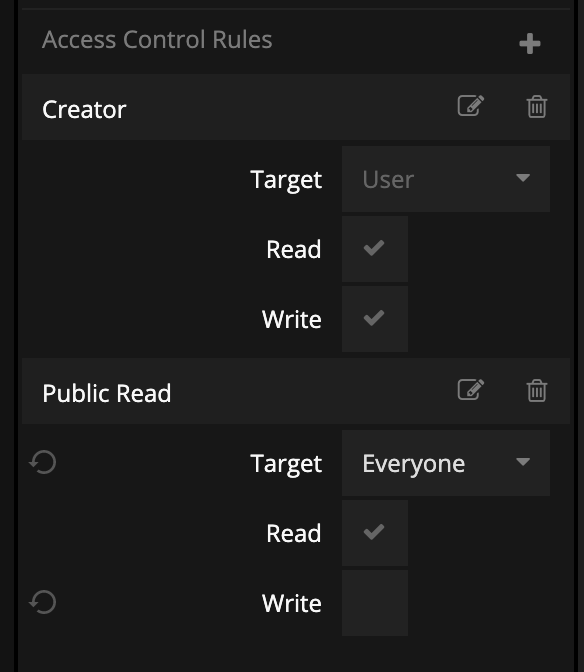 There are many ways you can use this pattern to control who can access your record. Let's say you are creating a Message record and you want the current users (the sender) to be able to read and write the message, and the receiver to be able to read it. You would use a very similar set of rules but with two User targets. 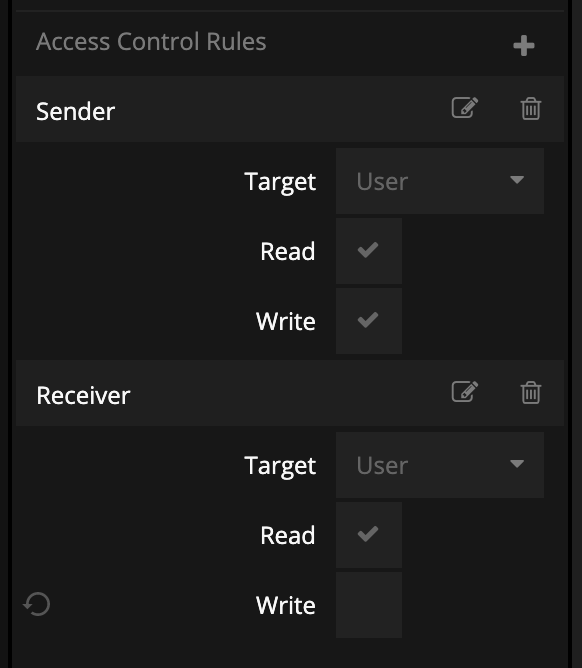 But you will also need to provide the User Id of the receiver (the sender will user the current logged in user). This is done via a connection to the User Id input that is created when you add a new User target rule.

This is great, but sometimes you want to have a record accessible by many users and if these users change over time it's a hazzle to update all records accordingly. This is where roles come in. A role is in it's essence simply a list of users (this is esstablished via a relation property called users on the role). You can add and remove users from the role using the Add Record Relation and Remove Record Relation nodes. You can add a role via the cloud services dashboard.

You need to provide a Name for your role (this needs to be unique among all roles), you also need to specify the ACL (the access control) and you should generally limit it to Master Key Only for roles that you create in the dashboard. Once the role is created you can add users to it via the User relation directly in the dashboard.

Once you have a role in place with users assiged to it you can simply create a Role access rule: 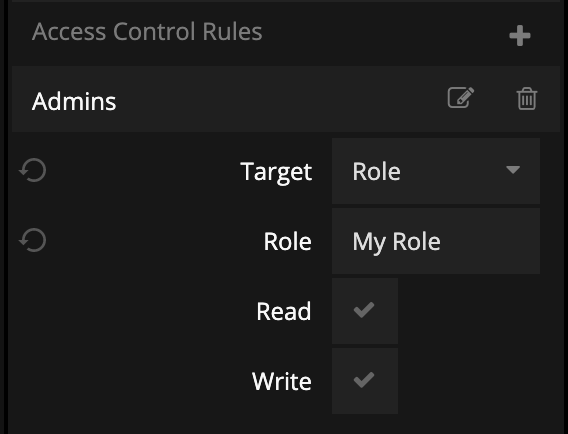 You choose the Role target, give it a descriptive label and choose the access rights. Then you need to specify the Role Name, that is the unique name you gave the role when creating it. This is case sensitive.

This is achieved by creating a new role, which is done as any other record with the Create New Record node, picking the Role class. You need to limit the access control of the Role otherwise it will not succeed to create. Here we let the creater, i.e. the current user have full access and also we grant access to "everyone in the team". This is done via the role name, that is the same name as we give the role when creating it (we provide that via a connection as shown below). 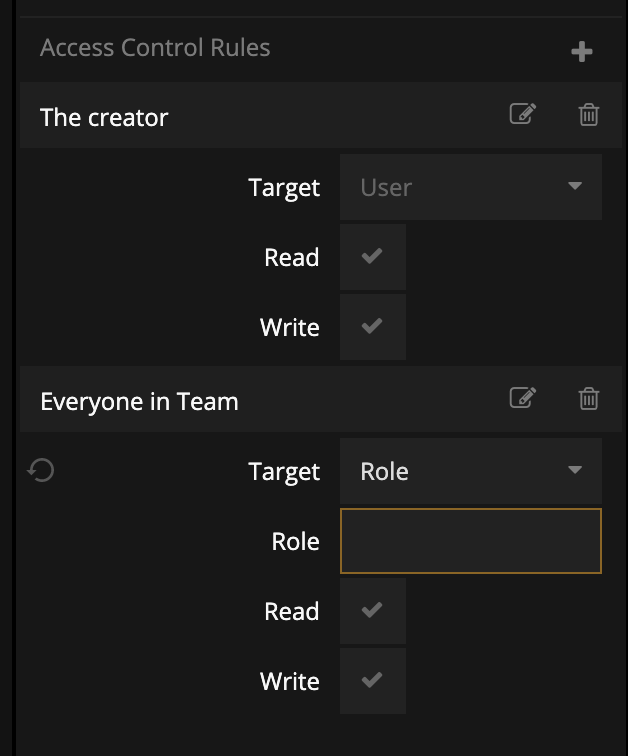 You need to provide a unique name for your new role, in the example below this is simply done with the Unique Id node. This is provided both to the name input for the role and also to the Everyoone in Team access rule as described above. 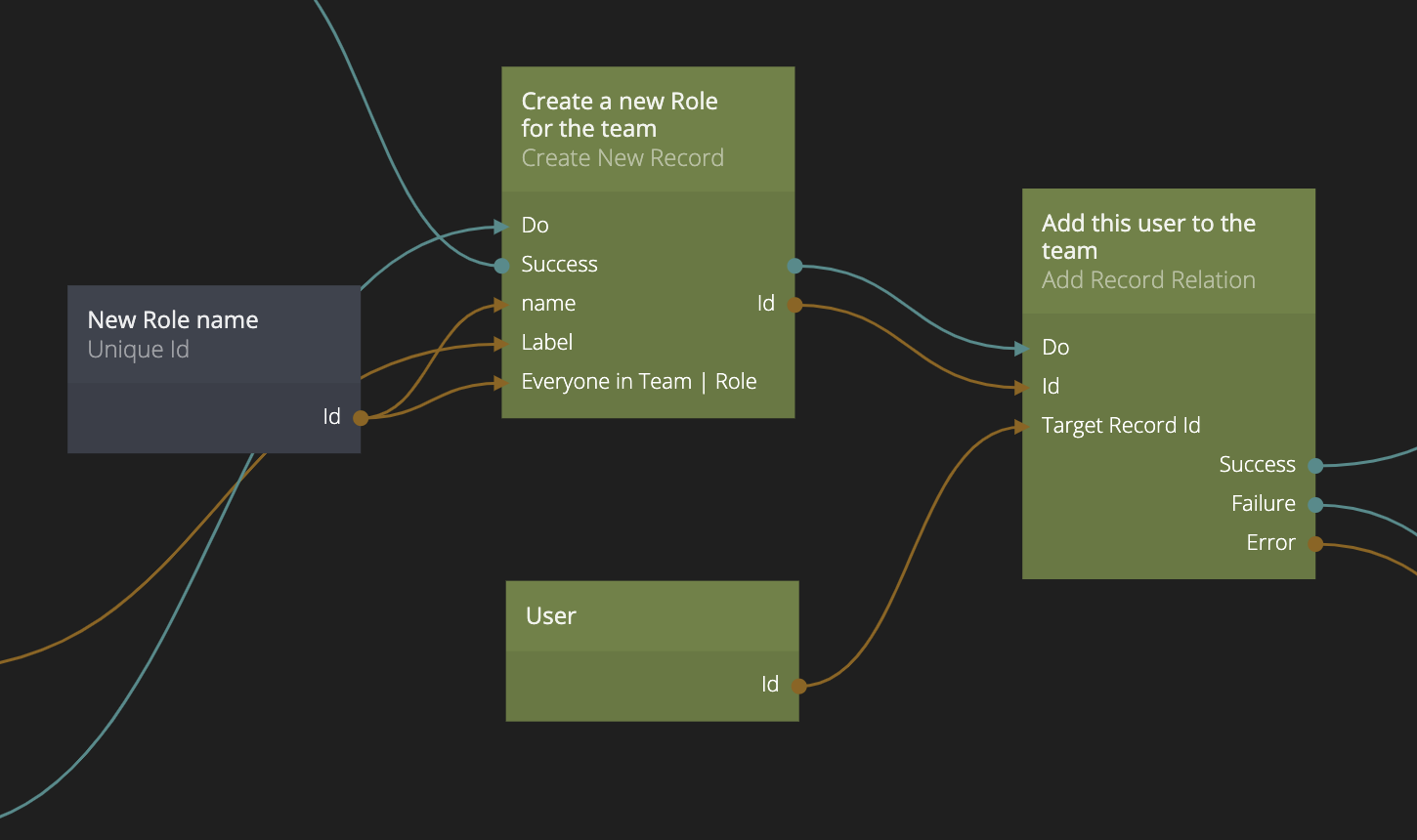 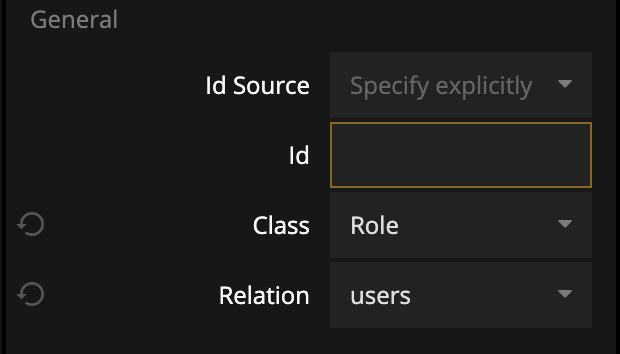 The Id is coming from the newly created role (that is the record where we want to add a relation), the class needs to be set to Role and the relation we want to add to is users.

Finally the Target Record Id is the user we want to add to the role and as you an see in the node graph above we get the from the User node that contains information on the currently logged in user.